Our next distribution in February 2023 is scheduled for the second Saturday:

Anyone picking up for another household must provide that household's name, address and the total number of household members.

The distribution will be held at the Western Kentucky State Fairgrounds located at  2810 Richard Street, Hopkinsville KY.

Items are given out on a first come first served basis.

Please have your trunk open and cleared out so we can place the food items there.

Our namesake, Rev. Aaron McNeil, a pioneer, churchman, educator and community leader, came to Hopkinsville Kentucky in 1896 as the first black Episcopal priest in Hopkinsville and first rector of the Episcopal Church of the Good Shepard. The building for the church of the Good Shepard, at 604 East Second Street, was constructed in 1896 with funds raised by Nat Gaither, president of the Bank of Hopkinsville and Hunter Wood Sr., publisher of the Kentucky New Era. It also served as the first school and library in Hopkinsville for African Americans. From the beginning, the Church was truly a community center. Aaron McNeil House was incorporated in 1972 and in 1983 the Center was designated a Kentucky Landmark. Originally, Crisis Relief Services operated out of the United Way Offices and Aaron McNeil operated as a separate United Way Agency until the end of 1991. Their merger came about during United Way's annual programs review process and, effective January 1, 1992, the Boards of Aaron McNeil and Crisis Relief merged. 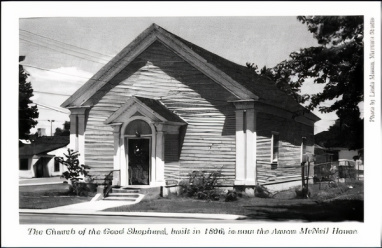 Commodity Distribtion is held once a month on the second Saturday each month.